THINKING ABOUT THE TEXT
Activity
1. On the following map mark out the route, which the author thought of but did not take, to Delhi.
” alt=”” aria-hidden=”true” /> 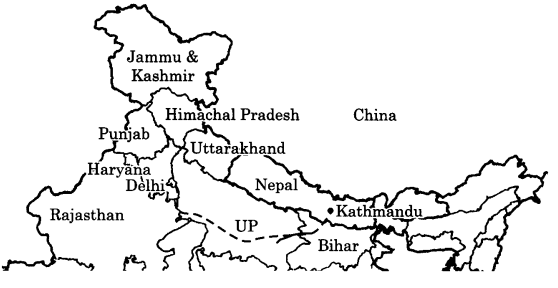 2. Find out the possible routes (by rail, road or air) from Kathmandu to New Delhi! Mumbai / Kolkata / Chennai.

Answer
For self-attempt. Students may take the Atlas of the country and see or find themselves the air, road routes from Kathmandu to New Delhi/Mumbai/Kolkata/Chennai.
Some possible routes are :
By Road

I. Answer these questions in one or two words or in short phrases.

II. Answer each question in a short paragraph.
1. What difference does the author note between the flute seller and the other hawkers ?
Or
What is the difference between the behaviour of the flute seller and that of the other hawkers ? (CBSE)
2. What is the belief at Pashupatinath about the end ofKaliyug ?
3. The author has drawn powerful images and pictures. Pick out three examples each of
(i) the atmosphere of‘febrile confusion’ outside the temple of Pashupatinath (for example: some people trying to get the priest’s attention are elbowed aside…)
(ii) the things he sees
(iii) the sounds he hears.

Answers
1. The author sees the difference in how they are sold. Other sellers cry out their wares to sell. But the flute seller sells his wares in an off – handed way.

2. It is that when the small shrine on Bagmati river comes out fully, the goddess inside will escape. Then the Kaliyug will end on the earth.

3. (i) Monkeys fight among themselves. They jump on to a shivalinga. They run round the temples. They make a noise and show their teeth. Priests, hawkers, devotees, cows, pigeons, dogs roam here and there.
(ii) The author sees people, animals and birds roaming here and there. A princess of the Nepalese royal house appears. All bow and make way. He also sees a party of saffron-clad Westerners. They struggle to enter the temple.
(iii) He hears the sounds of songs. Cows low and vendors shout out their wares. He hears these sounds. He finds the flute sound of the flute seller sweet and melodious.

III. Answer the following questions in not more than 100-150 words each.
1. Compare and contrast the atmosphere in and around the Baudhnath shrine with the Pashupatinath temple. (CBSE) (Imp.)
Or
How does Vikram Seth find the atmosphere in and around the Baudhnath stupa quite in contrast to that of the Pashupatinath shrine ? (CBSE)
2. How does the author describe Kathmandu’s busiest streets ?
Or
What observations does the author make about the Kathmandu bazaar ? (CBSE)
3. “To hear any flute is to be drawn into the commonality of all mankind.” Why does the author say this ?
(V. Imp.)

He sees that they are not Hindus. Monkeys fight and chase each other. One monkey jumps on to a shivalinga. Then he runs screaming around the temples. The river Bagmati flows below the temple. The old offerings of flowers and leaves are dropped into it. On the other hand, the big dome of Baudhnath stupa is ringed by a road. But there are no crowds there.

2. The streets of Kathmandu are full of life. These are full of small shops and vendors. They sell things of tourists’ interest. There are fruit sellers, flute sellers, hawkers of picture postcards and shops. These shops sell Western cosmetics. There are other shops also there. From them you can get film rolls and chocolates, or copper utensils and Nepalese antiques.

There is much noise. Radios blare out film music, car horns sound and bicycle bells ring. Stray cows low. Vendors shout out their wares. The author bought a roasted corn-cob from the pavement. He also bought a sweet dish, an orange drink and coca- cola. In fact, the bazaar is like a fair.

3. The author says so due to various reasons. For him or for anybody flute music is the most universal. It is also the most particular of sounds. The flute seller doesn’t sell one type of flutes only. Every culture has its own flute. They are different from each other. The flute seller does not shout out his wares. He simply plays different tunes on his flute. When he plays, the sound affects each and everyone. It touches everyone’s heart. So that way the author is drawn into the commonality of all mankind.

THINKING ABOUT LANGUAGE
I. Read the following sentences carefully to understand the meaning of the italicised phrases. Then match the phrasal verbs in Column A with their meanings in Column B.

II. 1. Use the suffixes -ion or -tion to form nouns from the following verbs. Make the necessary changes in the spellings of the words.
Example : proclaim – proclamation

2. Now fill in the blanks with suitable words from the ones that you have formed.

III. Punctuation
Use capital letters, full stops, question marks, commas and inverted commas wherever necessary in the following paragraph.
an arrogant lion was wandering through the jungle one day he asked the tiger who is stronger than you you O lion replied the tiger who is more fierce than a leopard asked the lion you sir replied the leopard he marched upto an elephant and asked the same question the elephant picked him up in his trunk swung him in the air and threw him down look said the lion there is no need to get mad just because you don’t know the answer

Answer
An arrogant lion was wandering through the jungle one day. He asked the tiger, “Who ‘ is stronger than you ?” “You, O ! lion,” replied the tiger. ‘Who is more fierce than a leopard ?” asked the lion. “You, sir,” replied the leopard. He marched up to an elephant and asked the same question. The elephant picked him up in his trunk, swung him in the air and threw him down. “Look”, said the lion, “there is no need to get mad just because you don’t know the answer.”

1. Fill in the blanks with the correct form of the verb in brackets.
(i) The heart is a pump that …… (send) the blood circulating through our body. The pumping action ……. (take place) when the left ventricle of the heart ……. (contract). This …… (force) the blood out into the arteries, which ……. (expand) to receive the oncoming blood.

WRITING
Diary entry for a travelogue
I. The text you read is a travelogue where the author, Vikram Seth, talks about his visit to two sacred places in Kathmandu.
Imagine that you were with Vikram Seth on his visit to Pashupatinath temple, and you were noting down all that you saw and did there, so that you could write a travelogue later.
Record in point form

Answers
1. Things seen at the Pashupatinath temple
A sign proclaiming: ‘Entrance for the Hindus only’. Priests, hawkers, devotees, tourists, cows, monkeys, pigeons, dogs roam about. A crowd of worshippers.

2. What is happening inside the temple
Many worshippers. People getting priest’s attention elbowed out. A princess of Nepalese royal house appears. Saffron-clad Westerners try to enter. Policeman. Monkeys fight. Jump onto a shivalinga.

3. What you do when inside the temple
No such description or reference.

4. What you do outside the temple
Bagmati seen flowing. A corpse is being cremated. Washerwomen work and children bathe. A basket of flowers and leaves dropped into the river.

5. What your impressions are about the place
Place most sacred for the Hindus. Worshippers don’t mind the crowd. They jostle their way inside. They don’t mind even when jostled. Place presents a scene of a big market where everything sells.

II. Here is your diary entry when you visited Agra. Read the points and try to write a travelogue describing your visit to Agra and the Taj Mahal. You may add more details.
January 2003 ……. rise before dawn ……. take the Shatabdi Express at 6.15 a.m. from Delhi …… meet a newly-married couple on train ….. talk about Himachal Pradesh …… get off the train …… enter the once-grand city, Agra …… twisted alleys ……. traffic dense …….. rickshaws, cars, people ……. vendors selling religious artifacts, plastic toys, spices and sweets …… go to the Taj Mahal …….. constructed entirely of white marble …… magical quality …….. colour changes with varying of light and shadow ……… marble with gemstones inside …….. reflection of the Taj Mahal in the pond ……. school-children, tourists ……. tourist guides following people.

Answer
It was January 2003. I rose before dawn and got ready to catch the Shatabdi Express at 6.15 am from Delhi. I met a newly-married couple on the train. They talked about Himachal Pradesh. I got off the train at Agra. It was a strange experience to move in the twisted alleys of Agra, once-grand city. The traffic was dense with rickshaws, cars, pedestrians, vendors selling religious artifacts, plastic toys, spices and sweets.

At last I reached the Taj Mahal. It is really a dream made physical. It has its own magical quality. It has been constructed entirely of white marble. It has got a strange effect on the onlooker. The marble changes colours with varying of light and shadow. The marble inside is inlaid with gemstones. The pond has the reflection of the Taj Mahal. There was a big crowd of school children, tourists etc., followed by the tourist guides to make quite bucks.

How to Link Mobile Number to Aadhar Card